So sorry not to be posting a Citizen Reading list again. I've got some freelance work on which I have to concentrate, which is a good thing, because my car clonked out on Saturday and the furnace man is coming on Thursday and so, all things considered, it could be an expensive week over here.

Hope you are staying warm and dry and enjoying the Olympics, if you are into that sort of thing. I must confess I can't get myself to care now that Russian figure skater Evgeny Plyuschchenko is retired. It used to be I watched the Winter Olympics solely to see him skate, and I still miss him. Below you'll find my favorite video of his skating. You don't have to watch the whole video--the skating program is only the first five minutes or so--but you do have to watch his program to the end. It is, as one commenter said, "amazeballs."

Now go forth and have an amazeballs week.

Michael Perry is just one of those authors I enjoy pretty much no matter what he writes.

My favorite book of his, I think, will always be his first memoir, Population: 485, just because it was such a perfect little jewel of a memoir, it was set in my native Wisconsin, and my Dad really liked it too, so I will always feel fondly of it. Since then Perry has produced multiple memoirs, essay collections, newspaper columns, even YA and adult novels. I always like him because he is trying to support his family as a full-time writer, and in this day of rampant medical and insurance costs, that is not so easy. I enjoy that he doesn't make it LOOK easy. Every time I read his stories about traveling around for literally hundreds of days in a year, giving talks and selling books in person and just generally doing the really hard slog of writing and selling books, I cringe a bit at how hard it can be to make an artistic living. Luckily he grew up on a farm, so he's no stranger to hard work. 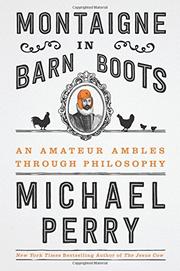 Which brings us to his latest offering, titled Montaigne in Barn Boots: An Amateur Ambles Through Philosophy. Although it still has the flavor of a memoir, this is more a series of essays about his reading of the philosopher/essayist Michel Montaigne, and how Montaigne's writings have added meaning and knowledge to his life. I love essays, and generally I am positive about Montaigne, although I don't really know much about him, so this was a pleasant and fast read. It doesn't really get into the philosophy aspect very deeply, but that's okay with me. I often find that the more philosophy is explained to me the less I understand it.

What I particularly appreciate about Perry is that, while he is not overly detailed or gritty, he is also not afraid to share the personal (and potentially embarrassing) details, which is what I demand in my favorite memoir reads. Here he offers an entire chapter on how Montaigne's health challenges (most notably numerous and horrible kidney stone attacks) informed his writing, or, as another essayist that Perry quotes has it, "Montaigne's kidney stones are his path to humble brilliance through the vulnerability of describing illness" (Perry is quoting a writer named Sonya Huber). I am in overall good health, but I am drawn to writing about the vulnerability of the body, because I've had enough health blips that I totally understand the vulnerability of the body. Here's what Perry writes, about his own vulnerabilities:

"I believe I can match Montaigne mood swing for mood swing, but when it comes to kidney stones, I have a shameful admission.

I passed one. Years ago.

And still I pee in fear.

But I'll tell you want Montaigne didn't have: Proctalgia fugax.

And if he did, he wasn't brave enough to write about it, despite all his protestations about utter self-revelation.

Which I have got.

It first struck one night in my early twenties. I'd been asleep for just a short time when I awoke to an indescribable pain that I will describe anyway as amateur proctology performed with a red-hot and poorly grounded curling iron. I mean, we are talking a bullet-sweat, bubble-eyed, liver-quivering, bust-out-the-smelling-salts situation...

It is Perry's particular genius that he can write about his butt pain and make me simultaneously weep in empathy for him and laugh until I cry. I enjoyed the book, and it gave me the desire to read more about Montaigne (or maybe even read some actual Montaigne). Good stuff all around.

A weekly selection of reading and book news, sometimes with completely inappropriate commentary; a bit truncated again this week (sorry) as I get used to my new old-lady reading and computer glasses. Aging blows.

From the "no shit, Sherlock" files: Amazon distribution centers aren't actually that good for a region's economy.

And yes, yes, I know we all shop at Amazon, but sometimes please make sure and try to visit an independent bookseller too, okay?

Ron Charles on the joys of reading aloud.

Have I aged right out of Dave Eggers? I just don't feel like reading anything he writes anymore.

George R.R. Martin has funded a scholarship for SFF writers.

Author Kwame Alexander is launching his own publishing imprint.

A National Book Award for translated literature is being created.

Looking forward to the HBO adaptation of Fahrenheit 451?

A new book about Thomas Jefferson's daughters...white and black.

A new biography by Lucy Worsley, about Queen Victoria, is planned.

Writer-on-reading extraordinaire Alberto Manguel has a new book out (titled Packing My Library).

A new book on the "uses and abuses of civil rights history," which looks really interesting.

Finally, an antidote for Hillbilly Elegy: a new book titled What You Are Getting Wrong about Appalachia.

A new book about depression and how to treat it.

The New York Times: two new books about technology (one by Jaron Lanier, who is an interesting case); on the plight of working women; a review of Rose McGowan's new memoir Brave; an argument "that culture and humanism are the best weapons against modern anti-liberal trend"; on China as a "country in profound transition".

Celebrate Black History Month every month with these picture books.

Gaiman has a new co-showrunner on American Gods.