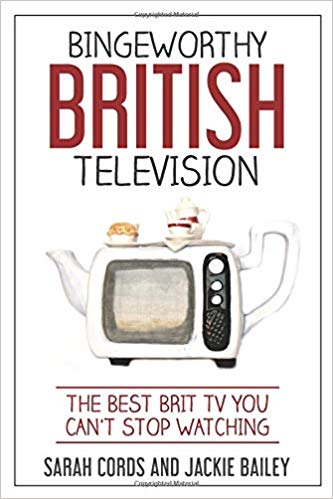 It's here! My new book Bingeworthy British Television: The Best Brit TV You Can't Stop Watching is now available as a paperback from Amazon!

The book is my love letter to all things British television, and perhaps my favorite thing about it is that it provided me with an excuse to make a new British friend: my co-author, Jackie Bailey, who provided the Brit perspective and answered all my questions about Brit TV (and life), like "How many BBCs are there?" and "Why don't the cops in your cop programs have guns?"

AND...we're running a promotion! It's called "Buy a Copy, Review a Copy, Get a Copy." Buy a copy of the book at Amazon, review it for us there, leave a comment here or send me the review link, and I'll contact you to send you a FREE second copy that you can pass along to someone else! BOGO, if you will, with a review in the middle.

I'm very excited, and yes, I want to hear your ideas for promoting this book. Marketing has never been one of my skills*, but I want to learn!

*Indexing is, though, and please note the book is fully indexed!

Do No Harm: Stories of Life, Death, and Brain Surgery, by Henry Marsh.

Have I ever talked in this space about how much I hate doctors and everything about the medical establishment?

Oh, wait. Yes I have. Quite a lot, actually.

So anyway. I don't like doctors. But then there's surgeons. Mostly I don't hate surgeons as much as I hate other doctors. Perhaps it's because I've had good luck with surgeons, if by "good luck" I mean they have pretty much solved the problems I went to see them for (although at least one did not shine in the department of helping me recover after surgery), and I can appreciate that.

So when I saw a review of a book by a neurosurgeon, Do No Harm: Stories of Life, Death, and Brain Surgery,* by Henry Marsh, I thought, yeah, I'm going to read that.

And it was FASCINATING. No kidding. Imagine just being a new doctor, not particularly enjoying it, when someone asks you to come along and help prepare a patient for neurosurgery, and after watching that surgery, you decide, boom, that's it, you're going to be a brain surgeon. This is basically what happened to Marsh.

I found this book endlessly fascinating. I can't say I liked the author, because he seems like the sort of doctor/surgeon/person I wouldn't much like if I met him (although if I needed him to fix a brain tumor, aneurysm, or other brain or spine problem I would be glad to see him). But I did enjoy his voice. I enjoyed his brisk descriptions, like this one, about how he hardly ever took a science class during his "private and privileged English education in a famous school," and eventually left Oxford to work as a hospital porter in the north of England, where he discovered he wanted to be a surgeon:

"Having spent six moths watching surgeons operating I decided that this was what I should do. I found its controlled and altruistic violence deeply appealing." (p. 76.)

I loved that. If there's any better description of surgery than "altruistic violence" I don't know what it is. It also makes it crystal clear to me why there are still more male surgeons than female ones.

There's some thrilling stories here, when everything went right during Marsh's surgeries on patients for an appalling number of different types of tumors, aneurysms, and other horrifying brain problems, and there's also a lot of heartbreak, when things just don't go right or (and it happens) something goes wrong due to surgeon error. Imagine having to tell someone you paralyzed them while you were trying to save them. Imagine telling a family that a patient bled to death on the operating table because you couldn't get the aneurysm clipped in the right way. I can't. I can't believe anyone can. So this book was a good reminder to me that, I may not like them, but thank goodness some people out there have the required personality to be able to cut into someone's head (and other parts), and they have terrible days. You really just have to hope you're never in a situation where their terrible day becomes YOUR terrible day.

I also liked that Marsh is a British surgeon and he had a lot to say about what goes on in the National Health Service and behind the scenes in hospitals generally.

Read it. But don't read it if you're scheduled to go into any kind of surgery any time soon.

*I love this review so much. God love The Guardian.

Something a little lighter for endless winter.

Mr. CR is firmly of the belief that all I read is "depressing nonfiction." He makes a fair point, as Mr. CR often does. I read a lot of depressing nonfiction. But not EVERYTHING I read is terribly sad. Take, for instance, the thoroughly delightful book Weird Thigns Customers Say in Bookstores, by Jen Campbell.

I blew through this one the other night as the delightful March breeze in my corner of the Badger State was taking us down to a record-breaking temperature below zero. In MARCH. That is not right. So, I was glad to have this very funny book to read.

It's organized in sections like "What Was That Title Again?", "Parents and Kids," and "Customers Behaving Badly," among many others.*

The anecdotes range from the brief and delightful:

To the slightly longer and delightful:

"[Child finds the light switch and begins to flick it on and off...and on and off.] Child's Mother: He's playing a game he calls night and day.Bookseller: Could you please ask him to stop? I need to be able to see the register to help these customers. Child's Mother: It's ok. He'll stop in a few minutes. See, he's pretending to snore at the moment. He'll stop soon and pretend to wake up, and switch the light on like it's the sun. He's so imaginative, isn't he? David, what time is it in the game? Child: It's five in the morning! Child's Mother: [to bookseller] See. Not long to go now. Just be patient." (pp. 48-59.)

Now, book people, go get this book and enjoy.

*All of which I'm sure librarians can appreciate too, although we would have to add a chapter for "Weird Things and People we Have Had to Pull Out of Bathrooms."