And now for something completely different: Raymond Feist's fantasy novel "Queen of Storms."

I used to read a lot of fantasy when I was younger, and every now and then I still like to read a good fantasy book. It doesn't happen very often, because I don't really have a good way to tell what fantasy I'll like just by looking at it, and there is too much fantasy published each year for me to plow through. But when I saw Raymond Feist had a new series out, I decided to go for it.

When I was younger, Feist was one of my favorite fantasy authors. I still fondly remember his books Magician: Apprentice and Magician: Master, featuring his main character Pug. I tend to read primarily because I like good characters (as opposed to needing a page-turning story or real comprehensive world-building, as you might see in Tolkien) and I thought Feist did a nice job of developing real characters and including some humor in his books.

The first book in the new series is King of Ashes, and I blew through that a few months back, so quickly that I barely remembered any of it when I finally got the sequel, Queen of Storms, from the library a few weeks ago. (Mr. CR liked the book too and was interested in getting the sequel as well, so hey, look at me, still playing librarian at home.) The story was pretty basic: One power-hungry king destroyed a neighboring kingdom (and bullied other nearby rulers into going in on the "betrayal," the invasion, as well), but the youngest member of the killed king's family was spirited away. Later in the book we see him growing up and being trained to be an assassin/spy, before...well, traveling somewhere.

I wasn't kidding when I said I really couldn't remember much of it. But it doesn't really matter. I remembered enough of the characters' relationships to one another that it was pretty easy to step right back into this world. The hidden heir, named Hatu, is now running an inn with a woman that he trained with when they were children (Hava). But all is not well in their world: an invading army, led by nobody knows who, is destroying cities left and right, and generally trying to send the message that they mean business. Meanwhile, Hatu is kidnapped by people who know who he really is, leaving Hava to try and find him. In the course of trying to do that, she herself is captured and sold as a slave, but she manages to take over the ship she and a bunch of other slaves are being transported on.

Yeah, I really liked Hava, if you can't tell.

It's a fun series. Good escapism of the sort I really kinda needed right now. 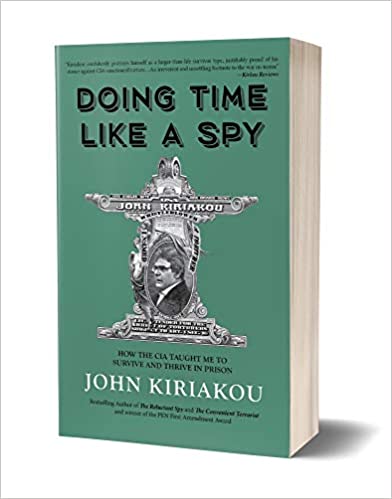 I really should not have read John Kiriakou's memoir Doing Time Like a Spy: How the CIA Taught Me to Survive and Thrive in Prison.

The minute I saw the word "prison" in this book's subtitle, I should have known to return it, unread, to the library. I have a wide variety of fears, and a fear of prison or anyone I know going to prison is one of them.* Although I am a voracious True Crime reader and have watched a lot of British detective and crime programs, I cannot read or watch anything that involves a prison storyline. I only checked out this book because John Kiriakou is a famous whistleblower, and I am fascinated by whistleblowers.

Kiriakou is a former CIA intelligence officer who, in 2007, became the first (former) CIA employee to confirm in a news interview that the United States was using torture on terrorism suspects like Abu Zubaydah, who was waterboarded. This really pissed off a lot of people, and in a truly breathtaking display of pricktastic and vengeful behavior, the FBI and the Justice Department investigated Kiriakou until they felt, in 2012, that they could punish him by charging him with "a.) three counts under the Espionage Act of 1917, an obscure World War I-era law aimed at prosecuting spies, b.) one count of violating the Intelligence Identities Protection Act (IIPA), a 1982 law aimed at thwarting radical publications that intentionally tried to out covert agents, under which only one person had been convicted since the law’s passage, and c.) one count of making false statements."

Keep in mind, please, that John Kiriakou did not torture prisoners (and yes, torture is supposedly still illegal under the Geneva Conventions), and in fact, when he was an active officer, he turned down an offer to be trained in "enhanced interrogation techniques"--national security-speak for torture. And yet, for telling the truth about prisoners who were being tortured, HE was the one sent to jail for 30 months.

That paragraph, to me, is everything that's wrong with America right now.

But I digress. Although Kiriakou gives a quick rundown of his case in the first chapter of this book, it is mostly about his experience being incarcerated for thirty months. And the Feds didn't fool around; although he thought he would be serving his time in a minimum-security work camp, the second chapter is about how he instead got assigned to the Federal Correctional Institution in Loretto, Pennsylvania. (More payback, evidently.)

What follows is an entirely unsettling account of how Kiriakou used tenets he learned in the CIA (like "admit nothing" and "blend in with your environment" and "if stability is not to your benefit, chaos is your friend") to survive his prison experiment.** Jesus. Even a "low-security" prison sounds HORRIFYING. I commend Kiriakou for making it through, but his descriptions of deciding which table to sit at (segregation is the order of the day), the crimes and mental problems of his fellow inmates, and the machinations of both prisoners and prison guards to survive and even profit where they can was almost more than I can read (and it's certainly more than I can stomach rehashing to tell you about here).

In short: Why anyone in this world still chooses to become a whistleblower is absolutely beyond me.

If you'd like a flavor of the book before trying it, it is actually based in part on a series of letters Kiriakou sent to the media while in prison: Letters from Loretto. You could preview those.

It's a good book. I certainly didn't get any dumber reading it. But can I recommend that you read it? Not really. Too scary by half.

*Me--or you--or anyone--going to prison is not as far-fetched an idea as you might think. Kiriakou tells you why: "Harvard Law School professor Harvey Silverglate argues in his book Three Felonies a Day that the US is so overlegislated and daily life is so over-criminalized that the average American going about his normal business on the average day commits three felonies." (p. 206.) I try not to think about this too much or I'll never sleep again.

**Please note: as he expounds upon these rules and how he survived, Kiriakou actually sounds like a bit of a prick sometimes. But the man refused to learn "enhanced interrogation techniques," and he went to jail because he wanted to tell the truth, so overall I still find him interesting.