This is now the third time I've had Ellen Ullman's book Life in Code: A Personal History of Technology, home from the library, and once again, I'm not going to finish it. 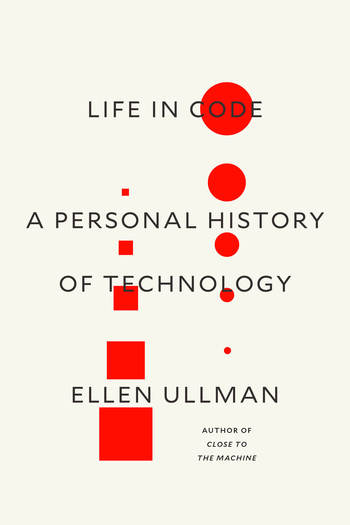 This is not because it's a bad book. I think it's actually a very good book. Unlike the last two times I've checked it out, this time I got through about 100 pages of it, and now it is overdue. (And it's perpetually on hold, so it's a popular book as well.)

Ullman (according to the book jacket), began her twenty-year programming career in the late-1970s/early-1980s. Evidently she is also the author of several novels and another well-known memoir, titled Close to the Machine: Technophilia and Its Discontents, which I'd never heard of. That makes sense, though; in 1997 I was still reading fantasy and studying film history, so the only nonfiction I read was biographies of James Dean and Montgomery Clift.

This book is a collection of pieces that have been written at various points in time; at the head of each chapter she tells you the year or the years when she first wrote it. This makes it a rather disjointed read (for me, anyway), but there's a lot here that made me go, "Oh, of course." A lot of things that bother me about our techie world, she talks about. She describes (in the 1994 chapter) how all programmers want to go "low," or "closer to the machine," so they can avoid the ridiculous work of creating systems for actual human users. She also describes a lunchroom conversation where all the techies try to figure out how long it would take to "wipe out a disease inherited recessively on the X chromosome." Eventually they get around to just killing every carrier. When she points out that that's what the Nazis did:

"They all look at me in disgust. It's the look boys give a girl who has interrupted a burping contest. One says, 'This is something my wife would say.'

When he says 'wife,' there is no love, warmth, or goodness in it. In this engineer's mouth, 'wife' means wet diapers and dirty dishes. It means someone angry with you for losing track of time and missing dinner. Someone sentimental. In his mind (for the moment), 'wife' signifies all programming-party-pooping, illogical things in the universe." (pp. 9-10.)

God. It's a good book. But you know the real reason I couldn't finish it? It made me so depressed I didn't think I could go on.

So I put it down and spent the rest of the weekend reading Agatha Raisin mysteries. I slept a lot better after those.

Whistleblower Edward Snowden and his wife Lindsay Mills are having a baby!

Yes, I know you probably thought I was talking about something else, but let's face it, unless it pertains to whistleblowers, I don't follow political news at all anymore. I don't want to get into a whole big thing about it, but I might just caution against thinking rural voters are a completely different species than anyone else. For a truly eye-opening look at the cultures, economics, and politics of living in rural America, I would highly suggest reading Paula vW. Dáil's excellent Hard Living in America's Heartland: Rural Poverty in the 21st Century Midwest.

But: that is all neither here nor there. 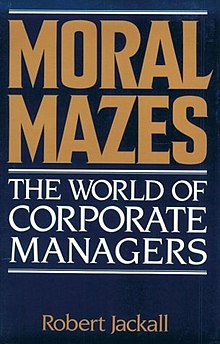 This week I'd like to tell you about this SUPER book I've been reading all summer long: Robert Jackall's Moral Mazes: The World of Corporate Managers. It was first published in 1988, and I'm reading the twentieth anniversary edition from 2008, but I'm telling you, it reads like it was written this morning. Anyone who is feeling grossed out by our world of corporations and groupthink and organizational behavior (three things which all gross me out A LOT), is going to find a lot to read about in this book.

Ostensibly the book is about the "occupational ethics of corporate managers," and can also be considered a "sociology of the peculiar form of bureaucracy dominant in American business."

Now that makes it sound dry as hell, and I'm not going to lie to you, this is an academic book. It requires slow reading and attention, which is why I can only get through about 1.5 pages every day, in between yelling at the CRjrs to stop hitting each other so hard (I've given up on telling them to stop hitting each other full-stop). But if you put in the work, I think you'll be rewarded, because here is a quote from an actual manager that REALLY tells you what the book is about:

And if that doesn't explain a lot of what is going wrong in the world today, I don't know what does.

More to come. Have a good week, all.