Evolution of a reading obsession.

I'm still reading everything I can find about whistleblowers.

When I finally finished every Agatha Raisin cozy mystery I could get (yes, the whole series, 31 titles, although I see there's a new one expected at the end of next year*) over the holiday season, I celebrated by going back to my typical fare: books that Mr. CR calls "depressing nonfiction." 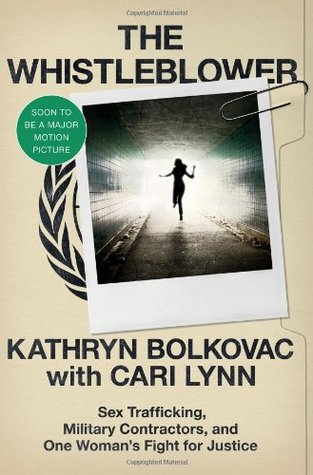 The depressing book in question is The Whistleblower: Sex Trafficking, Military Contractors, and One Woman's Fight for Justice, by Kathryn Bolkovac, with Cari Lynn.

Former Nebraska police officer Bolkovac details her time spent in war-torn Bosnia at the end of the 1990s and early years of the 2000s, after she applied to and went to work for a private military contractor. She thought she would be spending her time helping support a UN peacekeeping mission in the region, but that turned out not to be the case, particularly when she began filing reports about how women were being trafficked into and out of Bosnia, and, more importantly, who was paying to use those victims.

Mr. CR was right. It was depressing.

Particularly when Bolkovac tells one story of how she started to realize that many members of the international forces (including her co-workers) were not so much helping in an already bad situation as they were taking advantage of it. Consider her tale about "Carl":

"That evening, as [Carl] drove me home, he was not his normal, happy self. He told me his girlfriend had left him. I figured he had been trying to maintain a long-distance relationship with a woman back home and she just grew tired of being so far apart. But then he sighed and said, 'Yep, she ran away.'

I did not understand. 'She's a local girl,' he explained.

'Did she go back to live with her family?' I asked, still confused, but thinking she was probably a language assistant or secretary who worked in our offices.

'Well, she's not exactly from Bosnia. I think her passport says Romania or Moldova or something...' His voice trailed off, and he looked helpless.

I could not believe what I was hearing. I looked straight at him. 'Carl, where did you meet her?'

My eyes narrowed. 'Is it possible she'd been trafficked into Bosnia?'

'Oh, I don't know about that, Kathy,' he said dubiously. 'I bought her from Tanjo, he's the owner of the Como.'

I clutched my armrest, digging in my nails. I knew of Tanjo--he was one of the most notorious traffickers in the region. The Human Rights Office had been after this elusive man for several years--and all the while DynCorp's very own Carl had been having up-close-and-personal dealings with him?

'Tanjo gave her to me for 6,000 Deutsch Marks,' Carl continued as if he were talking about a puppy. 'I kept her in my apartment, and I wanted to marry her and brig her back to the States. But she ran away yesterday, and she took my mobile phone. I'd at least like my phone back.'" (pp. 148-149.)

Bolkovac's story followed the standard whistleblower plot: She noticed the problem, she tried to report the problem, her reports were covered up, she kept pushing because she didn't understand why her reports weren't being filed, and then she started to be retaliated against by her employer. It never fails to strike me as a really disheartening narrative, but she was (unlike many whistleblowers) vindicated in the end, although vindication did not really make up for her eventually losing the DynCorp job or the accusations she withstood during the entire process.

It was an interesting read, but dry at times. If you don't have the time to give to the book, it was also made into a movie starring Rachel Weisz; you might want to try that.

*The last Agatha Raisin I read was noted to be co-written by M.C. Beaton (the original author) and somebody named R.W. Green, and was published after Beaton's death in 2019. I stuck with it, but it sucked, and I can't say I'm too hopeful about the next installment, which I'm guessing will also be written by Green.

Everything you ever wanted to know about running for local political office.

Back in 2019, when I was young and still had energy for such things, I ran for local political office, also known as a spot on my city's governing Council.

But that turned out to be an okay thing, considering the fact that in 2019 my mom had a stroke and my husband had a heart attack, and in 2020 the whole world went down the shitter and I became a full-time homeschooler. I've really had enough to do without keeping on top of what the powers that be in my municipality are doing.

Okay, I lied. I still watch a little bit what my city powers that be are doing. As far as I can tell, they're continuing to subsidize already wealthy developers to build luxury apartment buildings (except they call it "workforce housing" to act like there's an altruistic method to their madness) and talking a good game about "sustainability" while spending a lot of money on amenities for rich people, which seems like an unsustainable system to me, but that's okay. It's just the way of the world.

But in a weird sort of way I really enjoyed running for local office, not least because I did a lot of walking around my neighborhood in the company of the youngest CRjr, who wasn't yet in school then. Those are good memories and will always be so.

But! I'm writing today to share the very exciting news that I wrote an article about HOW to run for local office, and it's been published by something called Better Humans at the Medium platform.* Here it is, if you'd like to peruse it: How and Why You Should Run for Local Political Office.

*Medium is a writing platform that will let you read some stories for free, but if you want to read more than just a sampling, you have to subscribe for $5 a month. I subscribed because I was finding some good stuff to read there, and it turns out you can also write stuff there and sometimes get paid for it, which is nice also. Anyone out there a subscriber or writer on Medium? Let me know in the comments and I would love to follow you on that platform.