Dancing With the Octopus, by Debora Harding.

Last week my laptop crashed, so I took it to be fixed, as I am never in the mood to buy a new laptop. 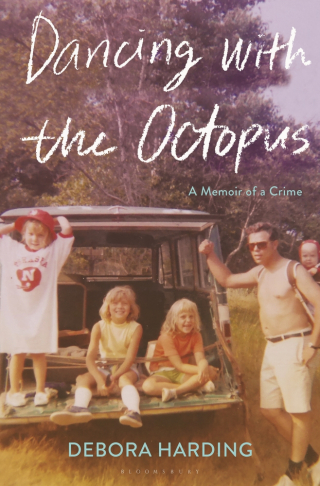 So my laptop spent a week at the laptop spa, and I spent a week being forced to check my email and read the Interwebs on my phone, which never stopped being annoying and which led me to wonder, yet again, how everyone can stand to be on their phones every minute. I don't do any real complex reading online, but trying to follow the thread of any story I was trying to read while only being shown two lines of text at a time on my teeny phone screen was infuriating. I know why all citizens have lost the ability to see the big picture--and that is primarily because we all spend our days looking at extremely tiny pictures.

On the bright side, the week was a nice time to wean myself off my continuing and destructive recreational YouTube habit, which is cheap and doesn't require me to get a Narcan shot, but which wastes literally ALL OF MY TIME. I spent the week reading even more than usual, and it was glorious.

One of the stupendous books I read was Debora Harding's true crime memoir, Dancing With the Octopus. It is the story of Harding's abduction and sexual assault when she was a very young teenager. To make the story even harder to read, Harding also slowly reveals the abuse that was present throughout her life in her own home. Although she had a close and loving relationship with her father, and good relationships with her three sisters, her mother was, if not stereotypically physically abusive, psychologically cruel and neglectful. Although she could confide some of her and her siblings' problems with their mother to her father, he often worked away from home and usually refused to believe things were as bad as they said.

This, then, is a memoir of family trauma and crime trauma, so it's not easy to read.

But you really HAVE to read it, because you have to meet Debora Harding.

This is a woman who has survived several types of abuse and trauma, which she did for a long time by mostly not admitting to herself (or others, never to others), how much she was affected by everything that happened to her. Her focus throughout the early part of the book is how she started experiencing symptoms that she did not understand, and which she slowly comes to understand are her body's delayed response to her childhood and the kidnapping. I am a huge believer that our bodies hold all our secrets and can be a mystery even to our brains, so to watch her work through the process of understanding her own physical being was powerful.

This is also a powerful story about restorative justice and what happened when Harding eventually met the man who kidnapped and assaulted her. It is a story of trying to come to terms with all of her own family members, at a time when she was trying to raise her own children.

I'm blabbing on pointlessly here. It's a beautiful book and you need to read it.