It seems like just yesterday I was posting about July 30 as National Whistleblower Day, and here we are again.

I wish I could report better news on the "let's be more humane as a society to the people who tell us about all the illegal and immoral secret shit going on" front, but I don't. Whistleblower Daniel Hale, who revealed information to The Intercept about how America's "precise" drone warfare strikes were not really so precise and killed a lot of innocent people, was sentenced to prison for 45 months this past Tuesday for doing so.

The Biden administration was asking that he be sent to prison for nine years, so I guess 45 months in prison is to be considered "good news." It's still wrong.

It feels like I am reading all the time, and yet I don't have much to report here. For one thing a good chunk of my reading has been about how to implement a plant-based diet, as Mr. CR has developed more heart disease symptoms and I'm interested in keeping Mr. CR as healthy as possible for as long as possible, because I like him a lot. The other day we were chatting a bit about people who love to carry guns, and I said, Why would you need to walk around with 80 pistols? (because I like to exaggerate but also because it seems like some people want to walk around with a lot of guns) and Mr. CR answered, Well, what would you do, Miss Smarty Pants, if the first 79 you were wearing didn't work?

That's Mr. CR's sense of humor, and you can see why it's important to keep him on the planet.

In other reading news I am re-reading Adrian Nicole LeBlanc's Random Family: Love, Drugs, Trouble, and Coming of Age in the Bronx, which knocked me over the first time I read it and is knocking me over again. Also, I started George Orwell's 1984, because I never read it. Have you? Has anyone? It's interesting.

I'm also trying to write a lot more. And got this published at The Progressive, in honor of July 30: "Shining a Light on the Tales of Whistleblowers." It's a review of director Sonia Kennebeck's trilogy of fascinating documentaries: National Bird, Enemies of the State, and United States vs. Reality Winner. They are excellent films and nobody shows you how tricky (and important) it can be to ask questions and try to figure out the truth better than Sonia Kennebeck does.

So how is your summer going? Whatcha reading?

Should The Hunger Games series be messing with my middle-aged mind this much? 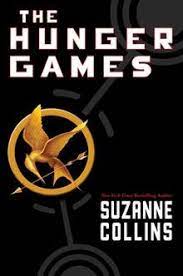 Remember when The Hunger Games trilogy was big?

Yeah, me neither. The first book in the series came out back in 2008 and it was right about then that I was busy having an awful surgery, trying to create a freelance career, and eventually having my first little CRjr. I was aware of Suzanne Collins's three popular YA books (Hunger Games, Catching Fire, and Mockingjay) but I didn't pay much attention. I think I read the first one, was underwhelmed, and never finished the series.

So why all of a sudden I had the urge to watch the movies that were made from the book, I couldn't tell you.

Eventually TV (my first crush), particularly British TV, supplanted movies in my heart, so for years I have watched only TV series when I've had the time to watch anything at all, what with the copious amounts of time I spend reading and also trying and failing to make my own living. But lately I have been in the mood for movies. So I thought, well, what do I want to see?

And for some reason I pulled The Hunger Games trilogy (although they made the three books into four movies) out of thin air.

The movies are awful. No kidding. Simplistic in story, bare-bones in character development and dialogue, hard to see as most of the plot seemed to be set in the dark, no chemistry between the lead actors (and, I ask you, how do you throw together beautiful people like Jennifer Lawrence and Liam Hemsworth and STILL have no chemistry?), glacial pace. Mr. CR is not generally a man who needs his movies (or his anything, frankly) to be "quickly paced," and even he kept saying, "Are these movies hundreds of hours long or does it just feel like they are?" And yet, I kept watching them. And I kept watching for one reason:

If you don't know the story, I'll try to nutshell it without giving away any spoilers, although I suppose this series is so old that anyone who cares has already seen it/read it/knows the ending. In a futuristic America known as "Panem," the country is controlled by the President in the affluent Capitol, while the rest of Panem is split into 12 districts that basically provide what the Capitol and its citizens require (and suffer greatly to do so). Each year, two "tributes" are chosen from each district--one male and one female--and all twenty-four tributes play against each other in the Hunger Games, until one victor kills the other 23 and is rewarded with getting to remain alive. The main characters are Katniss Everdeen, a sixteen-year-old from District 12, who volunteers to fight in the place of her sister Primrose, who was actually selected for the 74th annual Hunger Games. Another of Katniss's close friends, Gale, a slightly older boy, is also in the running, but escapes when Peeta Mellark is chosen.

Then Katniss and Peeta are taken to the Capitol, where they fight in the Hunger Games, and manage to change the narrative of what happens there. In the subsequent books, the 12 districts start to rebel against the Capitol, and Katniss, Gale, and Peeta all have their separate roles to play in that story.

Classic dystopia stuff, and classic love triangle, as Katniss eventually finds she has feelings for both Peeta and Gale.

But here's where the narrative takes a slight turn. Gale, a friend of Katniss's who hunts and gathers food with her, is a stereotypical strong, good-looking Alpha Male (with his softer side; he does pledge to protect Katniss's family while she is gone and if she is killed), while Peeta is presented as somewhat of a non-entity whose main characteristic is that he has noticed Katniss since they were both young, and has grown to love her.

So, anyway, the movies were so bad that I just went to the library and got the three books and plowed through those. And here's what I learned about these characters:

I'm in love with Peeta Mellark.

Peeta doesn't exist just to be in love with Katniss (although sometimes the movies seem to present it that way). He's good with words and he's clearly very clever, coming up with his own wily (and non-violent) plans to keep himself and Katniss alive. He's understanding of Katniss's independence, and even though it's easy for him to be committed to their "doomed lovers" narrative, because he actually does love her, he is ready to step aside in case she chooses Gale and--get this--he is prepared to remain friends with her if that's what she prefers. He does everything he can to stay alive and win the games, while also going out of his way to NOT kill other tributes; he bakes; he holds Katniss to help her through her nightmares when she asks.

Everything I read about today's dating scene at Medium (I really have to stop reading dating/relationship articles on Medium, which is big among millennials and tech bros) indicates there are not many Peetas in today's world.

So here I am, going through my old-lady life of raising kids and cooking meals and freelancing, and all the while I do it I'm thinking over the Hunger Games and Peeta Mellark.

Even a few years ago I don't think I would have given Peeta Mellark this much thought. But the more I read about men and women interacting with one another, and the more I see and hear out in the world, the more I think we really need to encourage men in particular to explore new ways of being. And that's why I'm so grateful for Peeta Mellark as a character.

Now on to the real question. Get your librarian/reader thinking caps on and tell me: Any other series, YA or otherwise, featuring male characters who are sensitive, intelligent, kind, and still end up succeeding/surviving/winning in their own way? Let's face it. Those are the kinds of books I want to give the CRjrs. Subliminal programming at its best: Don't be a bro, kids. Be a Peeta. (Or, as Lil Taylor's Corey character in Say Anything said to John Cusack's Lloyd Dobler, "No. Don't be a guy. The world is full of guys. Be a man." See? Movie memes, all day long.)