On October 18, 1971, hearings began before the Knapp Commission in New York City.

What were the Knapp Commission hearings, you might ask? I'm so glad you did! I just published a whole article about them at The Progressive. 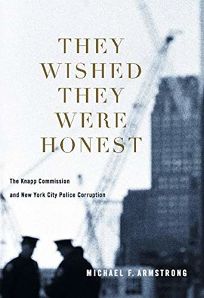 Basically, the Knapp Commission was formed in 1970 after police officers Frank Serpico and David Durk tried for years to get anybody in the New York Police Department (NYPD) to pay attention to the fact that the majority of its police officers were accepting pay-offs to look the other way on gambling, prostitution, theft, and a bunch of other crimes. The Commission helped bring national attention to the massive problem of police corruption. It focused specifically on the NYPD, but if you read its report, you'll find that a lot of what it suggests as problems and possible solutions would still hold up and provide helpful guidelines for any institution that wants to be less corrupt.

Assuming, that is, any of our remaining American institutions have any interest in not being corrupt.

There's a lot of good nonfiction out there to read about this event and time in history: consider starting with Peter Maas's bestseller Serpico (which, nearly fifty years after it was first published, is still a spectacular read). If you're interested in what all goes on when a "commission" and "hearings" are formed to investigate problems, you might also want to read Michael Armstrong's history: They Wished They Were Honest: The Knapp Commission and New York City Police Corruption. It's a very personal history; Armstrong served as the lead counsel during the Commission hearings.

If you know me at all, you know that, in a perfect world, I'd spend the vast majority of my time reading nonfiction.

But did you also know that I used to be a film and TV major (yes, such a thing exists, even though my mother refused to believe it)? And the only thing I like to do to break up my reading time is to watch TV or movies?

In recent years, I've also found that documentaries can really give me a greater understanding of some really complex issues. (I'm looking at you, "An Unreasonable Man" documentary, about Ralph Nader.)

This is all a long-winded introduction to the point I'd like to make: If you'd like to see a great movie this week, and you're still not going into movie theaters, please do consider buying a ticket to the Double Exposure Investigative Film Festival and Symposium. Specifically: Watch Sonia Kennebeck's film "United States vs. Reality Winner." If you've heard that name before but have never really understood the facts of Reality Winner's whistleblowing and how she was actually sent to jail for several years for revealing one classified document (that referred to an "open secret" that everyone in national security and journalism circles was talking about anyway)...this is the 90-minute film that will explain the entire complicated situation to you.

I've seen the movie and wish I could see it again and listen to the panel afterward, but I'm running out of time to get stuff done this week and it's only Wednesday. Do you want to see it? I'll gift a ticket to the first person to email me at sarah.cords@gmail.com.