What it takes to care for the human body: Marianna Crane's "Stories from the Tenth-Floor Clinic." 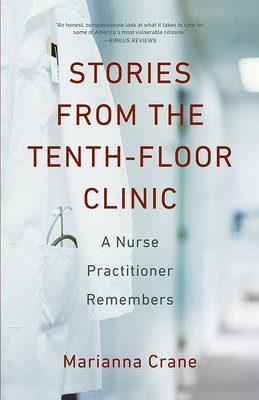 I took a break from reading about the horrors of management and bureaucracy to read a nurse practitioner's memoir about managing a senior health clinic in a Chicago subsidized housing building.

Mr. CR says I just don't know how to relax but the joke's on him, reading depressing nonfiction IS how I relax!

Oddly, although there are many depressing things in Marianna Crane's memoir, Stories From the Tenth-Floor Clinic, it is not really a depressing book. It is exactly what its title promises, a very straightforward memoir of Crane's experiences helping (primarily) elderly, very sick, and very poor people in Chicago.

"My mind drifted back to the day I had first met Stella. I had been alone in the clinic when she rolled her wheelchair off the elevator and stopped in front of the open door. She peered inside, saw me, turned around, and careened down the hallway. Where the hell was she going? I took off after her. She braked at the end of the corridor. Trapped in a dead end, she sat in her chair, silent.

I bent down so I could see her face. 'I'm Marianna Crane, the nurse practitioner. What can I do for you?' I said.

Stella concentrated on her hands gripped in her lap.

'Is something wrong?' I asked.

A dirty blond wig sat askew on her head. Only one leg, which was covered with a wrinkled cotton stocking, extended past the skirt of her housedress, and her foot was encased in a heavy black orthopedic shoe. She reeked of a sharp ammonia smell. Urine?

I remained crouched, determined to wait her out. Finally she raised her head, and said, 'I don't feel good.'...

I later found out that Stella had been a diabetic for many years. Because she didn't keep her blood sugar under control, she had developed peripheral neuropathy, a loss of sensation, in her legs and feet. She didn't realize she had stepped on a dirty tack while walking barefoot until her foot turned black. After she lost her leg, she was fitted for the prosthesis and then participated in just enough rehabilitation to be able to get around on her own." (pp. 144-155.)

There are a lot of stories like that in this book, which really is quite a fascinating read.

It's not quite as polished a memoir as I might like, it just kind of moves from one chapter to another without developing a real story arc, but it's very sincerely and well-written. I read the whole thing and I'm glad I did.

Last time, I shared some quotes from the book in which Jackall very briefly explored the history and psychology of the Protestant work ethic, and its place in our American system of business and bureaucracies.

Basically, the Protestant work ethic combined religion and business. The religious work ethic gave workers the idea that you could glorify by God by working really hard, and, further, by living simply and denying yourself, you could also save up resources and capital to have for your family. Jackall also shared the enlightening thought that, over time, the accumulation of capital led to conspicuous consumption and the assumption that "good people did good"--if you worked hard and invested wisely, you could not only do well financially, that also made you a smart and good person.

Enter: Bureaucracy. Specialization. The increasing organization of business and society along hierarchical lines.

It was kind of a lot to take in, and Jackall covered all of that in (literally) three pages.

No wonder this book is exhausting. But wow, is it good.

So here we are, still in chapter one, now up to the twentieth century. Or, as Jackall explains, our recent history (and by recent I mean the early 1900s through now) in which:

"Mass distribution required greater administrative coordination for its success, and mass production demanded the centralization of operations to achieve efficiency..."

Think big corporations and big schools. Big complicated supply chains. All in the name of efficiency.

And this didn't just happen in business. Here's a Jackall quote from this chapter to strike terror into your soul (or at least it should):

"The tide of bureaucratization spilled over from the private to the public sector, and government bureaucracies came to rival those of industry. The chief forces here have been the erection of the massive apparatus of the welfare state during the New Deal, the militarization of American society during World War II and the subsequent importance to key economic sectors of administered military spending..." (p. 9)

I maintain that kids in high school should be allowed to skip at least one year of American history classes if they just promise to read this book. If that paragraph doesn't sum up what military spending does to a society and your entire economic system, I don't know what does.

So: If we were smart, we've all gotten specialized and found our places in the bureaucracy.

But what is the special character of American bureaucracy? This is what Jackall has to say on the subject:

"But bureaucratic impersonality in its pure form lacks affinity with the American character. Our frontier experience emphasized individualistic solutions to problems, even if they were illegal; in any event, the law was often remote...Moreover, big city bosses based their quasi-feudal regimes on personal loyalty and on the delivery of personal services. By the time American corporations began to bureaucratize they instituted as a matter of course many of the features of personal loyalty, favoritism, informality, and nonlegality that marked crucial aspects of the American historical experience. The kind of bureaucracy that developed in America, especially in the corporations but even in the higher reaches of government, was a hybrid; it incorporated many structural features of the pure form of bureaucracy but it also resembled patrimonial bureaucracy.

Patrimonial bureaucracy was the organizational form of the courts of kings and princes. There, personal loyalty was the norm...Of course, in America, kings and princes were unavailable as objects of personal attachment. But the hierarchies of bureaucratic milieux allow the hankerings for attachment generated by the intense personalism of our historical experience to be focused on chief executive officers of corporations, as well as on certain high elected and appointed officials." (p. 11.)

Basically, we replaced our need to suck up to kings and princes with a need to suck up to CEOs, and in America, we also combined that with a weird frontier belief in avoiding the law and believing that we were all rugged individualists.

Here's why I believe this book. Here's why it's freaking me out. It was published more than thirty years ago, right? So think about that paragraph: a cultural belief that laws were made to be broken, and also a desire to be ordered around by strong leaders. And then look at headlines from this past week:

Want to read our Moral Mazes Read-Along from the very beginning? Here you go: