...won't keep the doctor away, or anything, but I still say a daily essay can make your life better.

How handy there is a website called "Essay Daily" to help you get your fix!

Over at Essay Daily, they periodically run a feature called "The Midwessay," featuring essays set in the Midwest, and I am extremely excited to say that they published an essay of mine last week: You Can't Go Home Again.

I've read a lot of the other Midwessays there, and they all provide a slightly different look at a region that doesn't often get a lot of love. The entire site is highly recommended!

Posted at 09:02 AM in Citizen Reader Elsewhere, Essays | Permalink | Comments (8)

New book about the Triangle Fire. 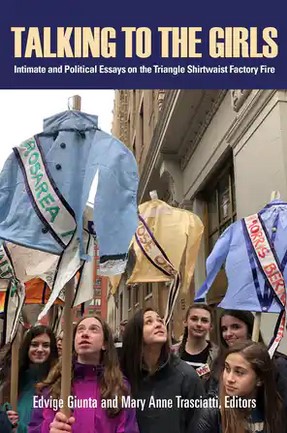 "On Saturday, March 25, 1911, at 4:40 p.m., as the workers prepared to leave with their pay in hand, an alarm bell sounded at the Triangle Waist Company...The factory was located on the eighth, ninth, and tenth floors of the modern Asch Building (now the Brown Buildings). Workers produced shirtwaists, an iconic item of clothing for the 'new' American woman inspired by the Gibson Girl, created by illustrator Charles Dana Gibson..."

This is a fairly sedate introduction to the Triangle Fire in 1911 New York City that wound up killing 146 workers, the vast majority of them women, and a lot of them teenagers. This, however, might come nearer the mark of what the terrible fire was actually like:

"...the Triangle fire was impossible to ignore. It assaulted the senses of middle- and upper-class New Yorkers. People saw smoke, bodies plunging out the windows, to be smashed on the ground below, firemen standing around helplessly with broken nets. They heard fire bells, screams from the victims, gasps from the gathering crowd, and the awful sound of bodies hitting the pavement, recorded with stunning clarity by [William Gunn] Shepherd: 'THUD-DEAD, THUD-DEAD, THUD-DEAD.'" (pp. 5 and 7.)

Both of these descriptions of this workplace disaster come from the introduction to a new anthology of essays titled Talking to the Girls: Intimate and Political Essays on the Triangle Shirtwaist Factory Fire, edited by Edvige Giunta and Mary Anne Trasciatti (and published by New Village Press). Here's the neat trick, though: the essays are not so much about the fire as they are about how the fire affected its survivors, victims' families, and countless labor activists since 1911. At first glance (especially if you're not fascinated by the Triangle Fire, as I always have been) that sounds like it might not be real exciting--but it is. Giunta and Trasciatti have both referred to this collection as a "labor of love" that they've been working on for years, and it shows. There's a wide variety of stories here--from artists who have written about and agitated for the Triangle Fire to not be forgotten and who themselves are now being gentrified out of their New York homes (which used to be tenements), to labor activists who worked with Chinatown's striking garment workers in the 1980s, to Frances Perkins's grandson, to a wide variety of people who either remember elderly relatives' stories about surviving the fire or who find out much later in their lives that their elderly family members were somehow touched by the fire or worked for the Triangle Shirtwaist company but then never, ever talked about it.

I've written a much fuller review of the book over at The Progressive, but I thought it was a really neat book and you should know about it. Also, if you've not read much about the fire to begin with, I can highly recommend both David von Drehle's Triangle: The Fire That Changed American and Leon Stein's The Triangle Fire.

It has been a wonderful spring for reading. (Not so much for doing anything outside; we're expecting another rain/snow mix tonight. That's okay. All I really like doing outside is reading, too, and I can do that just as easily inside!)

I've been in a bit of a mood, and when I'm like that I sometimes enjoy re-reading things I've enjoyed. So I re-read Peter Manseau's disturbing but very, very thoughtful and interesting memoir Vows: The Story of a Priest, a Nun, and Their Son, and if that title alone doesn't make you want to read it, I give up. (If you're more of a fiction reader, Manseau also just published the The Maiden of All Our Desires, a historical novel about a nun in the fourteenth century. I really like Manseau and want to support him as an author, so I bought a copy of that at Bookshop, but haven't read it yet. Also thinking I need to give some money to one of the numerous groups trying to prod the Catholic Church into allowing women and married clergy. Talk about a lost cause, but traditionally I am a huge supporter of lost causes, so that seems about right. 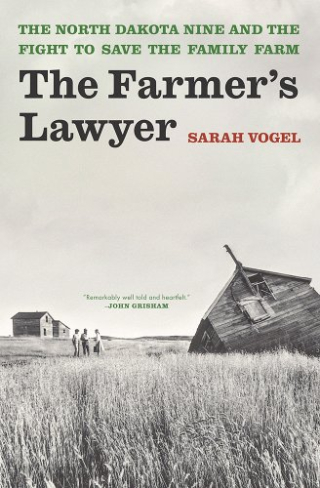 I also revisited Michael Lewis's The Big Short: Inside the Doomsday Machine, after watching and LOVING the movie of the same name. (Also: You need to go watch the movie right away; it explains a lot about how money is made--and lost--in this country.) Re-reading the book after the movie was fun; I thought they did a fantastic job of adapting the movie from the book, so it was fun to look at them together and look at what they changed. One of the few instances I've ever seen where the book and the movie are equally fantastic, for different reasons. (Another example of that is Norman Maclean's A River Runs Through It. Great book, great movie, for entirely different reasons.)

When I was done re-reading, I picked up a few new titles, namely Matthew Stewart's The 9.9 Percent: The New Aristocracy That Is Entrenching Inequality and Warping Our Culture and Sarah Vogel's The Farmer's Lawyer: The North Dakota Nine and the Fight to Save the Family Farm. The Farmer's Lawyer is a totally fascinating memoir and history of farm economics in the twentieth century, and most particularly of Ronald Reagan's (and his minions') shameful role in foreclosing on every single farmer they could possibly do it to in the 1980s. I grew up on a farm in the 1980s, so that subject was near and dear to my heart.

Spring has been a bit of a wash (literally; it won't stop raining or snowing or rain-snowing here) otherwise, but I'm at the point in my life where, you throw a few good books at me, that's about all it takes to keep me happy. Happy Spring to all of you as well.

Posted at 09:20 AM in Favorites, Investigative, Memoirs | Permalink | Comments (6)