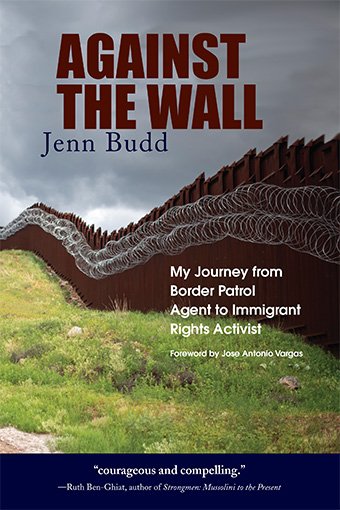 Yesterday I got another book review published at The Progressive. This one was of Jenn Budd's memoir Against the Wall: My Journey from Border Patrol Agent to Immigrant Rights Activist.

You really need to read this book.

I cover most of the reasons why you should read it in the review, but let me just say on a personal note that Budd's book made me learn and think about a lot of our national immigration "policies" that I hadn't previously. Did you know, for instance, that the Border Patrol reserves the right to patrol any territory 100 miles from any land or maritime border? Look that up. That rule covers two-thirds of the American population.

Really. Go look at that link (the two-thirds one). Brings this issue a little closer to home, doesn't it?

I won't lie. The book is a really tough read. Budd details her rape (perpetrated against her by a fellow agent in training) as well as a million other ugly racist and sexist things that go on in law enforcement.

But at its core it is still a hopeful book. It is also the story of a person living their life, trying to understand their own history and choices, and questioning why things have to be this way. In that way it reminded me of Debora Harding's superb Dancing with the Octopus, another superlative true crime book that was hard to read but really held out hope that humans can learn from and heal with one another.

Budd has also pledged that a minimum of 10 percent of any profits she receives from the book will be donated to organizations assisting migrants.

Labor Day weekend snuck up on me.

So I was thinking about Labor Day, my favorite holiday ever (no family gatherings, no war celebrating, no religious component), and realized, D'OH! I have been shamefully neglecting the labor of updating Citizen Reader. So I thought, I need to put up my annual list of my favorite nonfiction books about work for the holiday, and then I paused. It literally seems like I JUST did that. I don't know where the time is going any more.

But, without further ado, my favorite nonfiction books about work from the past year:

Talking to the Girls: Intimate and Political Essays on the Triangle Shirtwaist Fire, edited by Edvige Giunta and Mary Anne Trasciatti. From my Citizen Reader review: "Here's the neat trick, though: the essays are not so much about the fire as they are about how the fire affected its survivors, victims' families, and countless labor activists since 1911."

I also reviewed this book at The Progressive. I liked it a lot, and I enjoyed speaking with its editors.

The Farmer's Lawyer: The North Dakota Nine and the Fight to Save the Family Farm, by Sarah Vogel. This book blew my mind. Almost my entire review: "a totally fascinating memoir and history of farm economics in the twentieth century, and most particularly of Ronald Reagan's (and his minions') shameful role in foreclosing on every single farmer they could possibly do it to in the 1980s."

The Big Short: Inside the Doomsday Machine, by Michael Lewis (a re-read). About the financial crisis of 2008, which seems almost quaint now but which is still fucking us over in various ways. Just go read it or see the movie or both.

Stories from the Tenth-Floor Clinic, by Marianna Crane. Written by a nurse practitioner, this one's a bit rough around the edges but still an engrossing memoir about Crane's experiences helping (primarily) elderly, very sick, and very poor people in Chicago.

Moral Mazes: The World of Corporate Managers, by Robert Jackall. Can you believe I've not made it through this book yet? AND YET I LOVE IT SO MUCH.

Here's its opening paragraph: "Corporate leaders often tell their charges that hard work will lead to success. Indeed, this theory of reward being commensurate with effort has been an enduring belief and a moral imperative in our society, one central to our self-image as a people, where the main chance is available to anyone of ability who has the gumption and persistence to seize it. Hard work, it is also frequently asserted, builds character. This notion carries less conviction because business people, and our society as a whole, have little patience with those who, even though they work hard, make a habit of finishing out of the money."

This year is the year I am finally going to make it through this whole book. I swear it.

American Made: What Happens To People When Work Disappears, by Farah Stockman. A good book, but if you're going to read a work on manufacturing and what happens when you devalue the people who do it, you should read Brian Alexander's Glass House. But there were interesting things here too.

From my review: "Stockman followed three workers over the course of several years, in Indiana. One was a white woman named Shannon, one was a black man named, and one was a white man named John. She interviewed and got to know them and learned about their work at the Rexnord plant (a plant that made industrial and ball bearings)."

They Wished They Were Honest: The Knapp Commission and New York City Police Corruption, by Michael Armstrong. Read this one after you read Serpico, by Peter Maas. And if you don't know who Serpico is, go learn.

The Good Hand: A Memoir of Work, Brotherhood, and Transformation in an American Boomtown, by Michael Patrick F. Smith. Smith went to a North Dakota oil town to see if he could make some money as a skilled laborer in the oil fields. It's kind of a tough book to read--it drops you in a masculine world I may not have been ready for (and I live with three guys)--but I think it's important to read it for that reason.

From my review: "Let me just tell you right now, I don't know how people live and work in oil boom towns. I mean, I do, because I've now read Smith's book on the subject. But I don't know how (mostly) men move to North Dakota, live in close quarters with one another in tiny apartments and squalid houses (because there's not enough housing for all the men trying to find jobs), and then work ten to twelve hour days in North Dakota weather while moving around huge and dangerous machinery."

Those are the books about work that I read last year, and that is also the list of books that I blogged about, meaning that when I read nonfiction, it was almost exclusively nonfiction about jobs and work. I adore labor books, and I adore Labor Day. I wish you a very happy one.