I have a good friend who goes by the name of "The Laundress." The Laundress is a very skilled and interesting person, and she also possesses an encyclopedic knowledge of graphic novels, manga, and anime. This is very useful to me, as I know very little about all those things (and I'm not going to learn: really very little interest, and not enough time). But when the Laundress tells me to read a graphic novel, I listen. She has never steered me wrong. 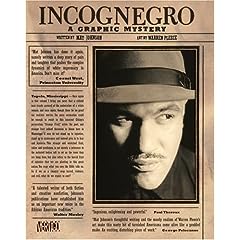 So when she suggested Mat Johnson's Incognegro: A Graphic Mystery, I listened. And I'm so glad I did. This one is fiction, but the author's inspiration came from the story of Walter White, a former head of the NAACP, who was so light-skinned that he could "pass" for white and often attended lynchings in the deep south to investigate them and tell the story.

I mean, lynchings. I do not understand how anyone thought lynchings were a good idea.*

So this is a graphic novel set in the early twentieth century, following the adventures of "Zane Pinchback," the "incognegro" who attended lynchings and wrote about them for newspapers. The story's not important but the idea is. This is one of the few books I've read this summer that I'd say you absolutely, positively, have to read. Don't worry--the Laundress won't steer you wrong either. (A word to the wise; parts of the graphic novel are truly graphic, language and violence wise. That's what happens when you tell a story about a violent and ugly history.)

*Whenever I think about race relations in America, I always picture this picture: people yelling at Elizabeth Eckford because she wanted to attend school. Look at her wearing her crisp blouse and 1950s glasses. How could anyone yell at such a girl?